(This is the final installment of Gay Degani’s wonderful series “Journey to Planet Write”, which she has been hosting for 2 years. An excerpt is below; to read the entire article, go here.

reasons—one, because I want to properly thank her on behalf of everyone who has appeared in and enjoyed this series. Gay has done an incredible service to our community and created a space where we can all shine. We are grateful to you, Gay!

But there is a second reason. Exactly one year ago I was scheduled to appear in this column when a drunk driver going 90 mph crossed the median on the highway and made other plans for me.

Instead of my Journey to Planet Write, you got my “Interrupted Journey,” a beautiful tribute that Gay and others put together. It meant a lot to me to feel so loved during that process of shock and recovery and now, one year later, it seemed important to not only bring it all full circle and give you that column that never was, but also to end this Planet Write journey on a note of celebration, healing, and hope.

I was 9 years old, living on a military base in Zaragoza, Spain, when I told my mom I wanted to be an author. I wrote my first creation, “Superman: The Musical”, on my mother’s electric typewriter, loving the clack of the keys and the feeling that I was doing something important. Though I attempted to cast it from my class of fellow fifth graders and rehearse in the carport, the musical (including numbers like Lex Luthor’s “I’ll Rule the World”) never made it to the stage, but my confidence in myself as a creative was born.

That same year I discovered the library, and on Saturdays I would volunteer at the check-out desk, stamping people’s due dates. Being a military family we moved a lot, so books became my friends. Nancy Drew was always waiting for me in every library from Spain to Germany to Omaha. Books were a constant in a world that was constantly changing.

Later, when life got harder, books became a way to disassociate; I could leave my body in the midst of everyday reality, escape family meltdowns and divorces and worlds I didn’t want to be in. In college, I read in the dressing rooms of go-go clubs, getting throughEast of Eden and The Trial while other girls were giving lap dances.

After I dropped out of college, I started traveling the country with the Renaissance Fair, living in a van, putting on a bodice and an English accent to sell turkey legs and pewter goblets. I discovered lyrical songwriters like Bob Dylan and Tom Waits and I started journaling regularly with the idea that these were adventures I would want to remember and maybe someday write a book. Sadly most of those journals are gone. But when I eventually got off the road and moved to Denver to finish college, I did so as a writer. 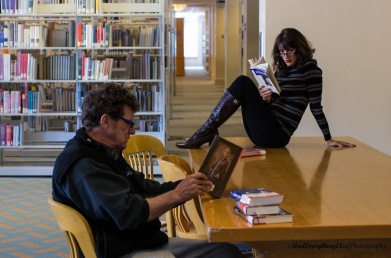 This story is true. But it’s not the whole story.My upbringing taught me two very different things: My military father taught me self-discipline. My artist mother taught me that making art is worthwhile. This combination has enabled to become a rare breed: a disciplined creative.

This story is true. But it’s not the whole story.